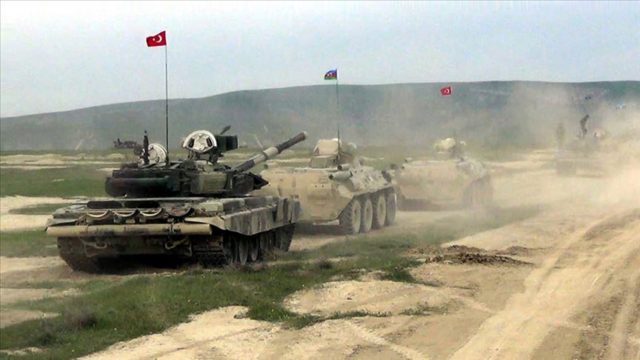 The armed forces of Turkey and Azerbaijan are set to conduct large-scale joint military exercises in Azerbaijan, the latter’s Defense Ministry said on July 27.

It said the land and air forces of both countries will join the military drills.

“According to the plan, exercises involving the land forces will be held from Aug. 1 to 5 in Baku and Nakhchivan,” a statement read.

“Exercises with the participation of military aviation will be held from July 29 to Aug. 10 – in Baku, Nakhchivan, Ganja, Kurdamir, and Yevlakh.

The announcement comes days after an attack by Armenian armed forces on Azerbaijani troops in the northwestern Tovuz border region. At least 11 Azerbaijani soldiers — including a major general and a colonel — were killed.

Azerbaijan blamed Armenia for the “provocative” actions, with Ankara throwing its weight behind Baku, and warning Yerevan that it would not hesitate to stand against any kind of attack on its eastern neighbor.

Upper Karabakh, an internationally recognized territory of Azerbaijan, is under illegal Armenian occupation since 1991.