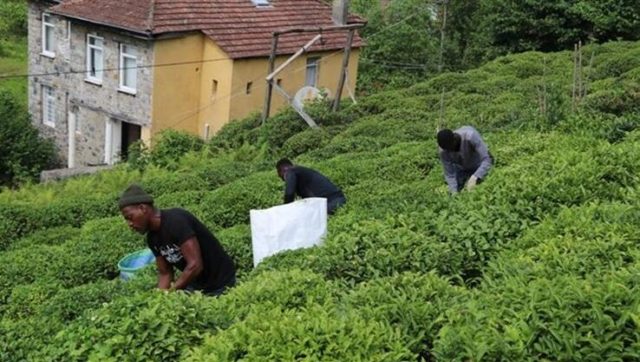 When workers from Georgia could not come to Turkey as they usually do to collect tea because borders were sealed in line with measures to halt the spread of COVID-19, Senegalese, Afghan and Uzbek nationals already in Turkey filled the void to pick tea in the Black Sea province of Rize.

Even Rize’s locals had difficulties returning to their hometown, as provincial borders in the country were shuttered too. Around 40,000 foreign workers expected to arrive in the city, but were barred from entering via Turkish border gates.

But nearly 20,000 people, most of them originally from Rize and who live in Istanbul, travelled to Rize to harvest tea leaves in the gardens in the beginning of June.

As families harvest their own tea with their own facilities in order to avoid loss of products, people from all ages and professions in the region also supported the harvest.

Senegalese, Afghan and Uzbek nationals living in the country and who have work permits replaced Georgian workers who would normally travel one hour, crossing Turkey’s northeastern border, to harvest tea in the region. But COVID-19 has prevented these seasonal workers from coming in.

Migrant workers are praised by their Turkish colleagues who say they are hardworking and agricultural land owners also have said they want to work with foreign workers.

From Senegal to Rize

The most popular employees of the vast tea gardens in Rize are three Senegalese workers.

A garden owner from Göndoğdu village of the province is accompanied by his three teammates from Senegal.

“They told me they wanted to come to Rize. Now they are collecting tea and making money,” Dal said.

“My African brothers are collecting tea very well. We want the authorities to see our African brothers living in the country,” Dal said, emphasizing that “good employees” can be rewarded with high pay.

Gaye has been collecting tea for three seasons, while Musa and Muhammed are newcomers.

“This year, we are collecting tea with Musa and Mohammed. It is difficult for those who do not know how to do it,” said Gaye.

Gaye also expressed that Rize is a beautiful region and that he loves the country.

The Ottomans were introduced to tea about 140 years ago. During the reign of Abdülhamid II, tea was planted all across the empire from Bursa to Aleppo and from Aydın to Erzurum, but it did not hold due to unfavorable climate in most cities.

However, it was soon understood that the Black Sea region was more suitable to grow this plant, and in 1947 the very first tea factory in Turkey was established in Rize, Turkey’s tea capital.