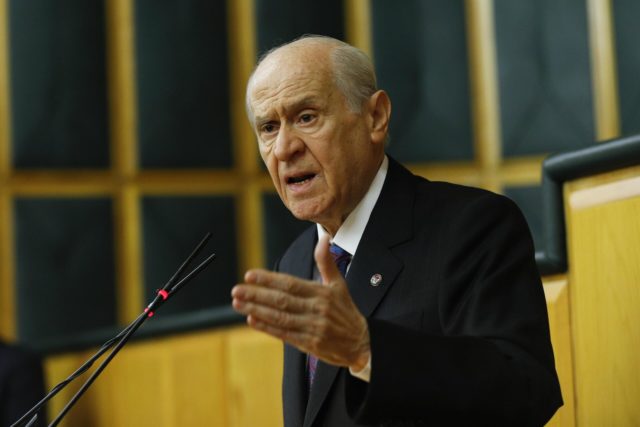 Lowering the flags of the Turkmens in northern Iraq’s oil-rich Kirkuk and planting the PKK’s symbols instead of them gives Turkey every right to intervene, the head of the Nationalist Movement Party (MHP) Devlet Bahçeli has suggested.
“The PKK is in the streets of Iraq’s city of Sulaymaniyah. In Kirkuk, Turkmens’ flags were lowered and the PKK’s symbols have been planted. These developments give Turkey a legitimate right to intervene and struggle in the toughest way,” Bahçeli said in a written statement on June 22.

There were recent reports in the media that the PKK has started to gain control in Suleymaniyah and in some parts of Kirkuk in northern Iraq amid recently launched military operation by the Turkish Armed Forces against the terrorists.

Reports suggested that the Turkmen flags were removed in some parts in Kirkuk by the PKK terrorists.

“The Claw-Tiger operation launched by Turkey’s national forces on June 15 is a strong message to the terrorists and their sponsors. The next message was conveyed by the launch of the Operation Claw-Tiger which destroyed the terrorists’ shelters,” Bahçeli stated.

Turkey has hit the Haftanin province in northern Iraq where the PKK is trying to establish its new headquarters, he said.
“As seen, the situation will escalate and the region will pass through hot days. And Turkey will continue to use its legitimate right to self-defense stemming from the international law,” Bahçeli added.