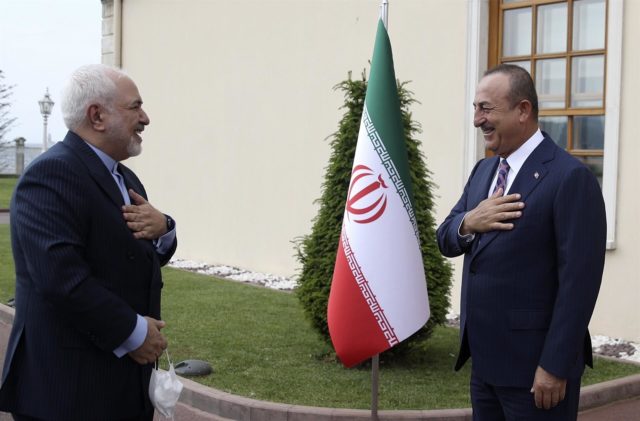 Turkey, Iran, and Russia aim to hold an Astana summit via videoconference as soon as possible in order to take the necessary steps for lasting peace in Syria, Foreign Minister Mevlüt Çavuşoğlu said on June 15.

“As for Syria, the presidency of Astana format is in Iran. We will work in this meeting to be held at a convenient time. Iran will host the next summit,” Çavuşoğlu said, speaking at a press conference with his Iranian counterpart, Mohammad Javad Zarif.

The ministers also covered security issues, including counter-terrorism, regarding Syria, he said, noting that the Astana partners have “made a serious effort in Syria, Turkey, and seen benefits.”

“In the next process, we need to talk and take concrete steps. The subject of the Syrian constitution is important, and we will continue to work on this issue,” Çavuşoğlu said.

The constitutional committee for Syria will convene in August, he said.

Astana guarantors will first hold a virtual summit, then an in-person meeting in Iran, Zarif said, noting that Tehran welcomes Turkey’s “proposal regarding the Astana” process.

Ankara has initiated to hold a virtual summit of Turkish, Iranian and Russian leaders since the planned face to face meeting in Iran was delayed due to the pandemic.

Russia, Turkey and Iran will continue to work together for Syria, the Iranian minister said, noting that Tehran is also standing by Turkey on the issue of Libya.

The Iranian minister also Zarif thanked Turkey for its stance regarding U.S. sanctions.

The flow of natural gas from Iran to Turkey will resume in the summer, he noted.

Turkey plans to resume flights to Iran as of Aug. 1 after a months-long hiatus due to the virus outbreak, the Turkish minister also said. The stability of Iran is crucial for Turkey, he said, noting that Ankara is rejecting unilateral sanctions against Iran.

Elaborating on a visit by Russian foreign and defense ministers to Turkey planned for June 14, but postponed on the day of the visit, Çavuşoğlu said it was not because of a “crisis” on ceasefire efforts in Libya, but for a requirement to further engage with partners in Libya in a bid to reach a lasting truce.

“It is evident that we support different sides with Russia but it is unreasonable to suggest that there had been a crisis regarding the cease-fire. We decided to postpone the meeting together,” he said.