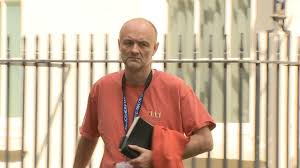 The UK transport secretary has said it is “completely untrue” that the prime minister’s chief aide travelled back to Durham after returning to London in April.

Speaking on Sky News’ Sophy Ridge on Sunday, Grant Shapps said it was “not the case that [Mr Cummings] has travelled backwards and forwards”.

“When he came back to London on 14 April he’s remained in London since and hasn’t been back to Durham,” Mr Shapps said, adding that there were “lots of things being said that are completely untrue”.

Mr Shapps was asked about fresh allegations in the Observer and Sunday Mirror that Mr Cummings was seen on two more occasions in the North East, after recovering from his own Covid-19 symptoms and returning to work in London.

Mr Shapps said: “I certainly know that the first one of travelling back up, I know that that one is not true.

“I’m afraid I don’t know [about the first alleged sighting, in Barnard Castle on 12 April].”

It comes after senior Conservative backbencher Steve Baker told the Sophy Ridge programme that “no-one is indispensable” and called for Mr Cummings to resign.

“If he doesn’t resign we will keep burning through Boris Johnson’s political capital at a rate that we can ill afford in the midst of this crisis,” he said.