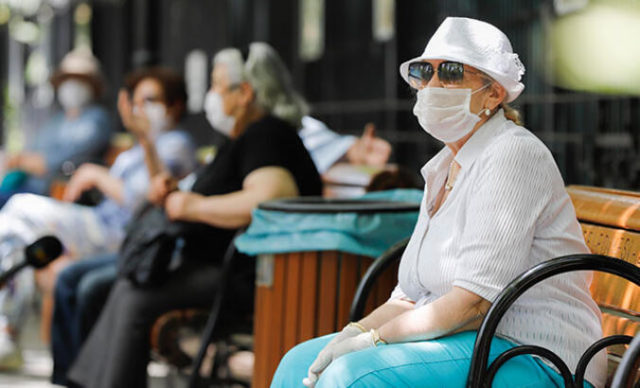 Elderly people aged 65 years and over will be able to travel for tourism purposes with a permission obtained from relevant authorities, the Interior Ministry has announced.

It was deemed appropriate to grant the travel permission to this age group for touristic purposes, as the number of confirmed coronavirus cases has slowed and the tourism season has started, the ministry said in a circular sent to the governors of the country’s 81 provinces.

Turkey has been easing the restrictions imposed on the movement of elderly citizens.

Those aged 65 and over — expect those with immunodeficiency and kidney failures, or those who had organ transplant operations in the past three years — can apply for the “Tourism Purpose Travel Permission,” the ministry said.

The elderly people will be able to seek travel permission for up to six people, including their spouse, siblings, and their immediate family members.

Turkey is not experiencing the second wave of the coronavirus but is still facing the impact of the first wave, the health minister has said, adding that the government was not considering imposing countrywide curfews.

Fahrettin Koca noted that there has been a fluctuation in the number of the confirmed coronavirus cases and said that the tests results are a warning sign against potential higher risks.

“We have no other option but stick with the rules this summer,” Koca said on June 24, following the meeting of the Health Ministry’s Science Board.

The minister also stressed that the government does not plan to impose countrywide curfews. “This issue was not discussed at the board’s meeting. Maybe province or district-specific lockdowns could be announced,” Koca said.

He furthered that it is too early to say if some restrictions could be considered for the upcoming Eid al-Adha holiday and said that such a decision will depend on the course of the outbreak.

“I cannot tell if there would be curbs for the Eid al-Adha but I believe even if restrictions are to be imposed they would not be like the ones announced during the Eid al-Fitr holiday,” Koca elaborated.

The final decision on this issue lies with President Recep Tayyip Erdoğan and the government, according to the minister.

Turkey declared a four-day nationwide curfew for the Muslim Eid al-Fitr holiday at the end of May.

Koca warned that most of the public has the false impression that the pre-virus normalcy has returned to the country, urging people to maintain social distances and wear masks. He also advised extra care during the summer season.

“The spread of virus has not slowed down, there is no scientific evidence that it has become less potent,” the minister said.

He also noted that before May 16, the average age of death from the coronavirus was 71 and now it is 74.

Hospitalization load has decreased, the number of patients in hospitals, intensive care unit patients, intubated patients and death rates have decreased to a great extent, according to Koca.

The minister also said Turkey is planning to work together with Russia and China for the clinical research of coronavirus vaccine.

He said studies pertaining to coronavirus were underway and that clinical trials are expected to be held this fall.

The Interior Ministry has issued a directive on the regulations for wedding venues, which are set to reopen on July 1.

According to the new rules, hosts are advised to hold the ceremonies outdoors, if possible. The duration of the ceremony should be kept as short as possible and only the bride and groom will be allowed to dance. The temperatures of the guests will be measured and attendees will be required to wear face masks.