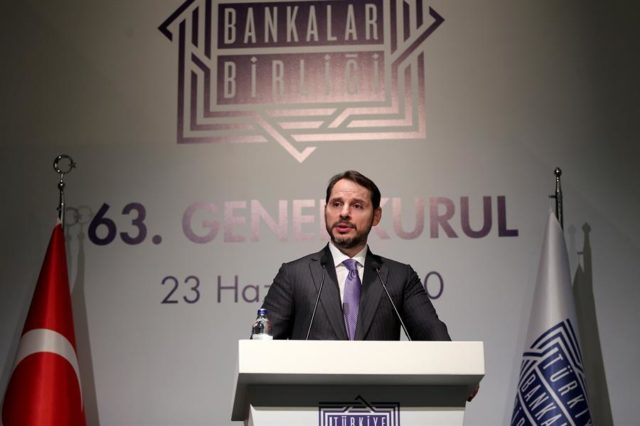 Turkey is anticipated to come out of the coronavirus-driven crisis with a V-shaped recovery, and will converge its potential growth, the country’s treasury and finance minister has said.

Addressing the general assembly of the Banks Association of Turkey in Istanbul on June 23, Berat Albayrak said the government clearly observes the recovery in economic activity.

He noted that the economy grew by 4.5 percent in the first quarter of the year on an annual basis and said that initial indicators suggest growth is likely to remain strong in the coming period.

“Despite the unfavorable outlook stemming from the coronavirus related developments in the second half of the year, preliminary data for economic recovery and confidence in the economy for June are promising,” Albayrak said, adding that Turkey is one of the economies least affected by the pandemic.

The minister also stressed that credit growth has remained strong thanks to lower borrowing costs, which resulted from the Central Bank’s rate cuts and cheaper loans provided particularly by state-owned lenders.

Total credits extended increased by 27.3 percent on an annual basis in May, according to the minister.

He elaborated that 133,000 applications have been received for low-cost housing loans, which were launched amid the outbreak, and around 25 billion Turkish Liras (some $3.6 billion) have been allocated under the scheme to more than 100,000 individuals.

The size of the Economic Stability Shield package the government announced to help firms and households weather the impact from the outbreak has exceeded 280 billion liras, excluding deferred loan payments and interests.

There is a clear improvement in domestic demand and expectations, he added.

Albayrak also proposed the banks to revisit their old practices and refresh themselves to adapt to the changes in the post-virus era.

“We expect you [banks] to perform work more compatible with the development goals of our country,” he said.
The minister called on banks to speed up re-structuring of loans and said the government would support the formation of an asset management company to take on loans of problematic companies from all banks.

Albayrak said the government was aware of plans by banks to set up the asset management company, adding that it should have an effective model.

The country’s exports have increased 24.6 percent in the first 21 days of June from the same period of last year, the minister also said, citing data from the Turkish Exporters Assembly (TİM).