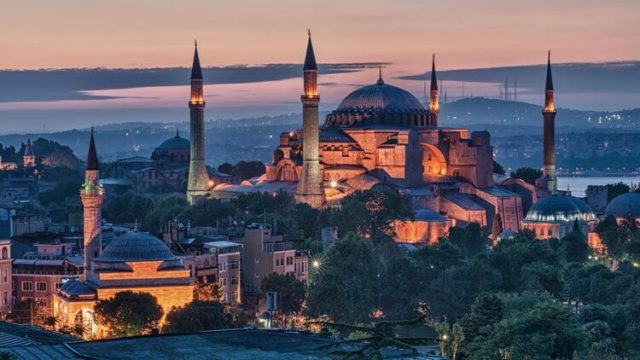 The debate over the possible reopening of Istanbul’s Hagia Sophia Museum as a mosque has turned into a domestic political row between the ruling Justice and Development Party (AKP) and the main opposition Republican People’s Party (CHP), an MP for the latter has said.

Kaboğlu said the decision to take this to the Council of State to issue a verdict on whether the museum should be turned into a mosque, as it was during Ottoman rule, is an “instrumentalization of the judiciary on the issue of Hagia Sophia.”

After receiving backlash from AKP MPs over his remark on the Sultanahmet Mosque, he revised his comments in an interview with daily Hürriyet, saying he never asked for the conversion of Sultanahmet, a place of worship, but that it should be embraced “in the sense of empathy and with a more universal perspective.”

AKP spokesperson Ömer Çelik accused the CHP deputy’s proposal of changing Sultanahmet Mosque into a museum as “disrespect” to Turkish values and culture. “We strongly condemn this mentality,” he stated. He accused the CHP of speaking like “rival countries” that are against Turkey. “Those who think this way only speak the theses of other states on the issues of Libya, the eastern Mediterranean and Syria,” Çelik said.

“Turkey has reinforced the respect for places of worship of all religions for many years. They [CHP] are doing all kinds of disrespect in parliament toward this country,” he added.

Meanwhile, speaking to daily Hürriyet, Turkey’s Religious Affairs Directorate (Diyanet) head Ali Erbaş expressed content on the possibility of converting the museum into a mosque. “Of course, we would be very happy to open Hagia Sophia for worship. I hope it opens. If it is opened, as the Presidency of Religious Affairs, we will provide our religious services as we do in all our mosques,” Erbaş said.

CHP group deputy chair Özgür Özel on June 11 said the debate launched by the AKP aimed only to “change the subject of the agenda” in Turkey. “Political Islamists have regarded Hagia Sophia as an issue of abuse and a milestone for years. From time to time, bargaining is a subject that is sometimes used in foreign relations,” he told reporters.

A non-governmental organization, the Association for the Protection of Historic Monuments and the Environment filed a lawsuit initially in 2016 for converting the UNESCO world heritage site into a mosque. The association renewed its application in 2010.

The Council of State examines the request for annulment of a cabinet decree of 1934 that turned the Hagia Sophia from a mosque into a museum. The court will make its ruling on the Hagia Sophia’s status on July 2 on whether the site can be converted into a mosque.