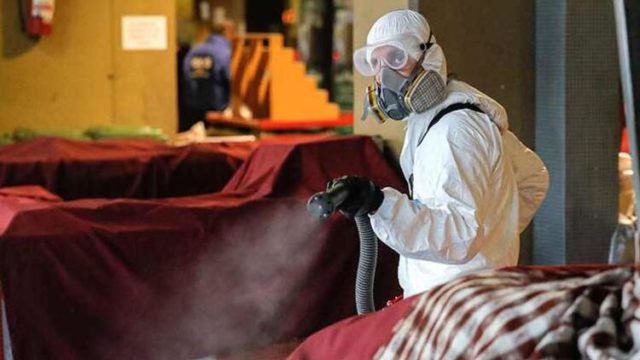 The bodies of 18 Turkish Cypriots who are due to be sent back to their homeland are still being held in a London mosque weeks after their deaths.

Turkish Cypriots in the United Kingdom, one of the communities most affected by the COVID-19 outbreak, are holding the bodies in a Hackney mosque in east London to fulfill the will of their relatives who lost their lives.

All the deceased requested to be buried in Turkish Cyprus.

One of them was 26-year-old Sonya Kaygan, who contracted the virus while working at a care home in Enfield in north London, where many Turkish and Turkish Cypriots live.

But the efforts of the U.K. Turkish Islamic Trust, the funeral services firm, and the families of those who passed away have not yet yielded results, attempting to overcome the bureaucratic obstacle for two months, according to Turkish Cypriot media.

Islamic burials usually take place within 24 hours of death, but Turkish Cyprus had closed its borders due to the COVID-19 pandemic.

Authorities have granted approval for most of the bodies to be flown back after June 1 when borders re-open partially.

The mosque’s funeral director, Erkin Güney, told the BBC that they had held an “unprecedented” number of funerals in the last six weeks, which had been “traumatic” for the community.

Oya Tuncalı, the representative of Turkish Cyprus in London, said approval was granted on May 14 for 11 deaths not thought to have been linked to coronavirus, for burial on Cyprus after June 1.

“Approval is still pending for another seven individuals, all of whom died from COVID-19,” she added.

In the U.K., where the measures were initially not as strict compared to other European countries and authorities introduced lockdown measures much later than many countries in the world, some five percent of those who died due to COVID-19 are Cypriots.

Members of the Turkish Cypriot community, who mostly work in elderly nursing homes in London and have close family relations just like other Mediterranean societies, lost 91 of their compatriots in the city due to COVID-19.