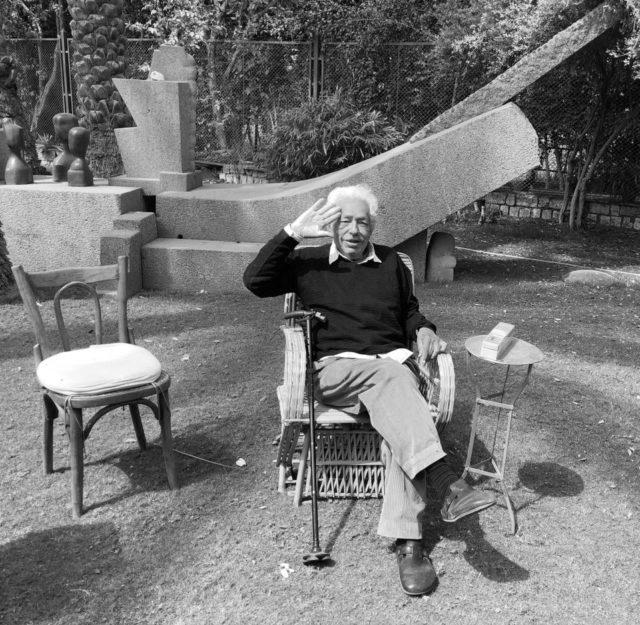 The Egyptian artist Adam Henein, one of the Arab world’s most important and ground-breaking sculptors, died on 22 May in Cairo at the age of 91. Known for his use of traditional local materials, his inspiration drawn from Ancient Egypt, and an emphasis on modern forms, Henein’s works combined abstraction with fine craftsmanship. He was an artist not only committed to his work but also to developing the cultural scene in Egypt: “I feel Egyptian and my work reflects that”, he once said. During his long career he represented Egypt at one of the world’s most illustrious art exhibitions, the Venice Biennale; spent almost a decade painstakingly restoring the country’s beloved Great Sphinx; and created a museum of his own collection as a gift to the nation. Sitting in his garden with him in his later years, it was a great privilege to see him thriving there despite the chaos Cairo that was witnessing.

Early life
Born on 31 March 1929 into a Coptic Christian family of gold metalworkers originally from Asyut, his birth name was Samuel Henein. His primary education mixed Qur’anic school and Sunday church visits. In 1961, he met Afaf el Dib and converted to Islam in order to be able to marry her two years later in Aswan. From then onwards his name became Adam Henein.

He knew from a very early age the certainty of his destiny as a sculptor, from which nothing had distracted him. As a teen he loved accompanying his father to the Jewish district of Cairo, where his family had a shop, to watch the craftsmen working. The powerful experiences Henein had during a school visit to the Egyptian Antiquities Museum and subsequent revisits developed the aesthetic values that became his touchstone.